Skip to: A glimpse of Sowing Diversity= Harvesting Security in Nepal 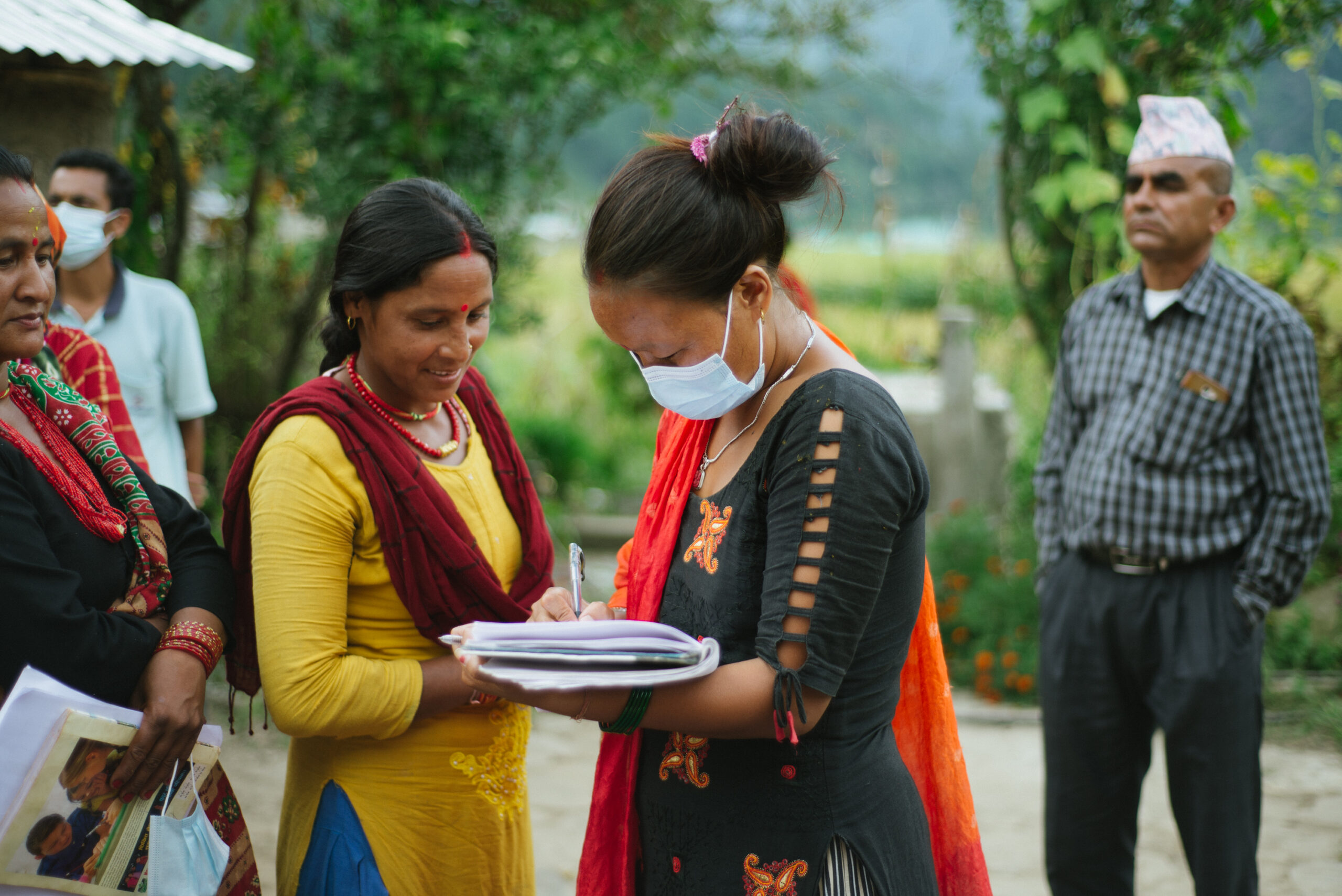 In Nepal, the Sowing Diversity=Harvesting Security project is implemented jointly by Oxfam in Nepal and LI-BIRD. Nepal was selected to implement the phase II of SD=HS in 2019, since then the project has been successful in many ways. We wish to honestly share our successes and challenges with the SD=HS community, to reflect and learn from each other.

In the last three years, SD=HS in Nepal managed to strengthen the capacity of 26,441 households which indirectly benefited a total of 72,877 persons, with women accounting for more than 70% and youth for 40%. Despite Covid and other challenges, the team achieved 76% of its four-year target. This translates as a total of 144 farmer field schools – with 81% of these farmer field schools on participatory plant breeding, and 87 facilitators who received training on different farmer field school topics.

To date, the project has tested 132 germplasms of rice, wheat, potato, soybean, rapeseed, and garlic through the farmer field school (FFS) on participatory plant breeding (PPB).

SD=HS project Nepal adopted the FFS approaches differently than other SD=HS countries. In Nepal, all facilitators and 90% of master trainers belong to Indigenous smallholder farmers (in other countries government extension workers take up the roles of facilitators and master trainers). Nepal’s experience showed that developing the capacity of a local person is more sustainable compared to training extension workers, as they frequently change workstation and have other priorities.

In the first year, we learned that the frequency of weekly classes in every FFS is not feasible for farmers. Many of them would drop out. Over time we adapted and now have an agreement with participants where there is space to skip a few sessions during a season. We have now familiarized ourselves with the methodology, though the theory of Farmer Field School emphasizes the necessity of a weekly basis.

Inspired by other SD=HS countries, the Nepali team adopted the volunteer engagement of facilitators. However, we note a few practical complexities, namely:
1) difficult to maintain when confronted to an established norm of remuneration for FFS facilitators by the government;
2) complicated engagement of facilitators over the long term, and
3) huge time and money investment for organizing Training of Trainers in each season for new FFS topics (FFS for nutrition and local food plants, as well as farmer seed enterprises).
In case of a next phase, we suggest holding a wider discussion around facilitators’ time contribution and their remuneration or rewards.

Another point of attention is data collection. Participants record data on AESA weekly, but they do not know why they are collecting it. Farmers rarely go back to the ASEA form while deciding their preferences. We must ask ourselves: Do we really need so much data?

In Nepal, one of the major challenges in the FFS is the low participation of male farmers. This is problematic because in most communities, men tend to be responsible for the selection of seeds in their field. It will result difficult for a community to adopt varieties chosen from FFS without engaging men.

To solve this issue, SD=HS Nepal reached out to male member through informal research kits; where we distribute seed varieties from the FFS to other farmers in the form of small package to grow and compare with their own varieties.

The project is also increasing awareness about FFS to male members during village meeting.

In total, the five CSBs conserved 152 local varieties of rice and vegetables. The FSE seed production increased from 78% to 100% compared to the first year. We noted that seed production is a profitable business, hence more indigenous people and smallholder famers are converting to become seed producers. The team counts 119 new seed producers who joined the FFS on farmers‘ seed enterprises. We can confidently conclude that both CSB and FSEs increased farmers’ access to quality seeds. A whole 70% of seeds held in CSBs and FSEs were sold to local farmers, private companies bought excess seeds.

However, SD=HS Nepal observed that working with CSB and FSE does not come without its challenges. Both are owned by the indigenous people and smallholder famers and often have weak internal control systems. In 2020, SD=HS Nepal withdrew from one of the FSEs due to their poor internal control and compliance system, most of the project staff’s time was consumed in improving internal management and financial systems. Since then, the team in Nepal perceives its role as strategic technical assistant, conducting various activities such as capacity building, financial monitoring, and tools dissemination to strengthen the workings of FSEs and CSBs.

Importance of local food plants
The project helped to establish three multipurpose resource nursery gardens to promote Neglected and Underutilized Species (NUS) crops and other plants. The team supported one women’s enterprise working on the processing and marketing of NUS crops. The project facilitated the preparation and varietal registration proposal of five farmers’ varieties (4 rice and 1 soybean) across Nepal.

SD=HS Nepal supported the Tharu community homestay, which is managed by the freed bonded labor indigenous community. They serve recipes from the different NUS and local crops to customers in an awareness raising effort.

Recognition and collaboration by public institutions
Similarly, the project assisted in the varietal registration of 11 crop landraces in Nepal. The team worked on institutionalizing the FFS on PPB by establishing a Memorandum of Understanding with the Ministry of Land Management, Agriculture and Cooperative and Sudurpaschim Province. This group jointly worked towards the promotion of Agrobiodiversity and integrate climate-smart agriculture into FFS sites.

At the moment, SD=HS is technically supporting seven FFS on PPB organized by five Agriculture Knowledge Centers in five districts, two of which are outside of the project’s sites. The collaboration with government has led to the Nepali team leveraging more than 200,000 euros from provincial, local, and other government funds to support FSE and seed producers.

In future, SD=HS project in Nepal will continue working on institutionalizing Farmer Field Schools on Participatory Plant Breeding to all the provinces of Nepal. Likewise, it will focus on commercializing the varieties resulted from the FFS through Community Seed Banks and Farmers’ Seed Enterprises.

Oxfam Nepal and LI-BIRD will continue their advocacy and influencing work on farmers’ rights.  The SD=HS project Nepal will further focus on the documenting and publishing learning materials and will continue exchange of experience with other countries. You can find more information about the team on the SD=HS website.