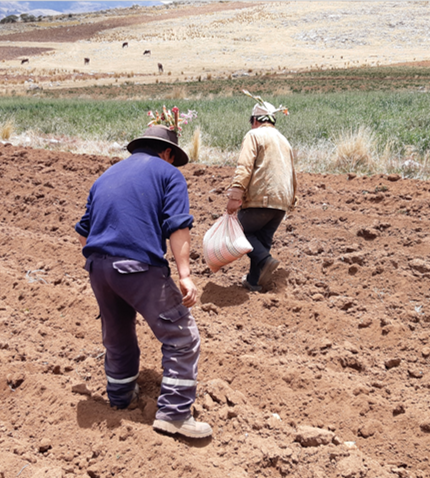 Extreme weather events are now regularly in the news, while the latest IPCC report concluded that the time to prevent Earth’s temperature from raising more than 1.5C “is now or never”. At the same time, the State of Food Security and Nutrition in the World report for 2021 estimated that around 800 million people face hunger and malnutrition now. These are the main problems against which Oxfam Novib works. This negative scenario seemed even more challenging in 2021, with new spikes of the COVID-19 pandemic being felt in almost every locality throughout the world. Most countries put up severe measures to prevent infections and at the same time rolled out huge vaccination programs, but the pandemic still claimed millions of deaths and had a very strong impact, especially affecting the world’s poor. It also put at risk the possibilities for citizens to publicly meet and exercise their voice and in that sense affected the different activities that were planned as part of the SeedsGROW program.

Nonetheless, the different teams were better prepared than in 2020 and could efficiently leverage on the digital tools and mechanisms available, ensuring a high degree of engagement and participation at all levels. It has thus been possible to show positive results, in spite of the difficulties. With its different activities, SD=HS reached a total of 48,000 households in 2021 and improved their access and management of agrobiodiversity, contributing to more healthy diets and the resilience of their livelihoods. We estimate that in 2021 more than 260,000 households benefitted indirectly (with three-year totals that are close to the targets set for the whole program’s duration). Just as rewarding is that more than half of all beneficiaries are women and that the total figure rose slightly during the past 12 months, and that women lead the training processes in the different countries where we work. Up to 60% of all facilitators are women, and in some cases, as in Nepal, they make a total of up to 95%. SD=HS was also able to engage over 60 representatives of research institutions, farmer organizations, donor agencies and other in a debate on how to “bring farmers to the table” in agricultural research, leading to new partnerships in this area.

The same can be said of the GROW campaigns and advocacy efforts. In 2021, almost 20 million people were reached in different ways through the Global Campaign, and 234,000 people signed different petitions. Eleven food companies showed significant progress in terms of policies and commitments that aligned to Oxfam’s campaigning and advocacy efforts. The different initiatives put in place by Oxfam both at a national and at a global level, together with its partners, convinced large companies to publish their commitments to support women workers and farmers in their supply chains or to “close the living wage gaps”. The World Climate March was a great example of the synergies that can be achieved when connecting local and global efforts. In a year when physical participation in the Glasgow COP was very difficult, more than 17,000 people in over 40 countries signed up and joined and marched in the city where they live. Images and messages from these activities were projected around Glasgow during the COP and were also shared through social media. On land rights, 2021 claimed a big win as the Supreme Court of Peru issued a landmark ruling granting land titles to the Nuevo Andoas community and compensation for the land losses they had suffered. These wins are crucial for our efforts to address impunity in different countries as well.

In 2021 we also conducted the program’s Mid Term Review, looking at the 2019-2021 period. The evaluation team ran individual interviews and focus group discussions with more than 150 participants in the GROW project, confirming the relevance of the three pathways. The report validates the strategic direction and prioritization of the program and of the broader campaign, pointing at the need to continue working to influence the agroindustry, the IFIs and governments on the selected topics of land rights, climate finance, and food systems. Looking at the SD=HS activities, the evaluators discussed with country office representatives, facilitators and FFS participants, collecting 342 stories showing the impact that SD=HS has had on their lives. The report concluded that the participatory plant breeding program has many positive results to show, and that it is clearly responding to the needs and rights of indigenous peoples, smallholder farmers, women and youth. It concludes that the logic of the Theory of Change of SD=HS is “impeccable” but also a long term one, requiring the capacity and commitment of all stakeholders to engage in a long-term process. These findings, observations and recommendations are already being used by the teams to guide the program in 2022 and further strengthen it, and to inform the development of a next phase.