Skip to: Highlights from the 9th Governing Body meeting of the Treaty 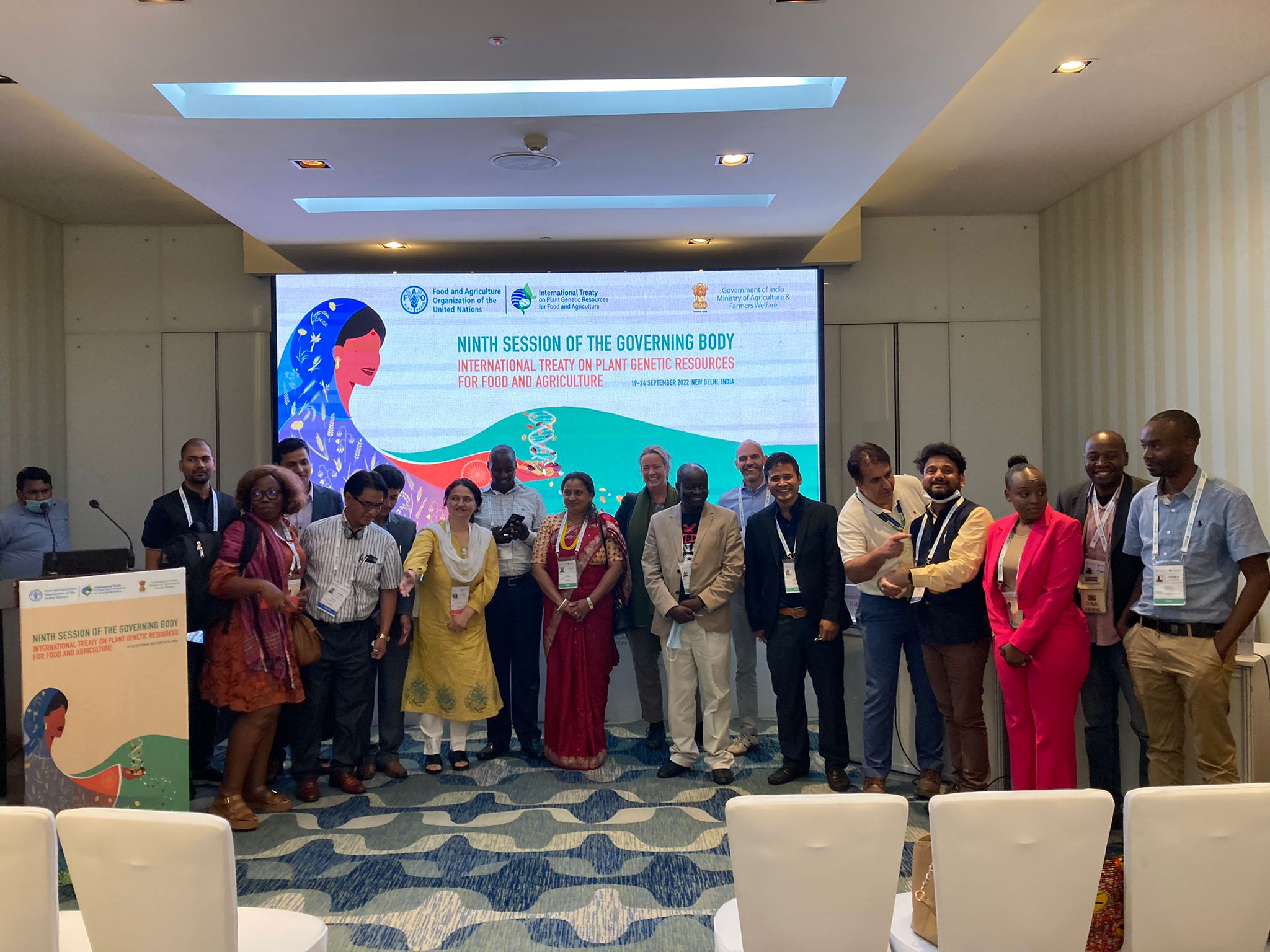 In the week of September 19-24, an SD=HS delegation participated in the 9th meeting of the Governing Body (GB9) of the International Treaty on Plant Genetic Resources for Food and Agriculture (ITPGRFA – ‘the Treaty’), in New Delhi, India. Delegates and other conference participants, meeting in person again for the first time in three years due to the pandemic, were eager to get to work again with the many issues that relate to the conservation and sustainable use of the world’s plant genetic resources for food and agriculture. With accelerating climate and biodiversity crises, participants agreed on the necessity to maintain and protect the world’s remaining agrobiodiversity, and to come to new agreements on how to organize this in a most effective way.

The team travelled to New Delhi to showcase best practices and lessons learned from the implementation of the SD=HS program. Through the organization of side events, the two SD=HS country teams had the opportunity to share how they had been addressing challenges, innovations and dilemmas related to the development and registration of farmer varieties with an international audience of seed experts.

Furthermore, both side events presented the SD=HS program as an example of how a Treaty-member such as Sweden can contribute to the implementation of the Treaty. For that reason, the Treaty Secretariat and the Swedish board of Agriculture on behalf of the Swedish International Development Agency (Sida) opened the Zambian side event. This event focused on how participatory plant breeding (PPB), implemented through SD=HS Farmer Field Schools, has enabled smallholder farmers in Zambia to select, enhance, develop and market seed varieties of their choice. The Nepalese side event, which was organized in collaboration with the Alliance of CIAT and Bioversity International, focused mainly on the challenges and innovations in farmer variety registration.

Sida Contribution to The TreatyDownload

The main takeaways for both sessions were: If we aim for the advancement of an enabling policy environment, institutionalization of PPB, and the registration of farmer varieties; a deeper understanding of the benefits of farmer seed systems is needed with researchers and government officials across the board. Intensified and more formal collaborations with government actors like Seed Control and Certification Units and breeders within National Agricultural Research Centers would be needed in order to safeguard and facilitate the institutionalization of SD=HS work, for example through inclusion of learning schemes. This is something that the SD=HS program might take on going forward.

Advances on key issues and Farmers Rights at the 9th meeting

As for the advancements of topics discussed at the ITPGRFA’s plenary session, the SD=HS program is happy to note that discussions on the enhancement of the Treaty’s Multilateral System (MLS) on Access and Benefit-Sharing will resume again, after a stand-still of almost three years. Whereas farmers and breeders alike depend on the facilitated access to PGRFA which the MLS provides, its benefit-sharing component has not functioned so far. New negotiations are badly needed to fix this imbalance and make the MLS fit for the future.

Another important topic for SD=HS is the conversation around Farmer Rights, the Governing Body decided to ‘take note of’ a document prepared by the Treaty’s Working Group on Farmer Rights, (titled “Options for encouraging, guiding and promoting the realization of Farmers’ Rights”), to publish and translate it in all UN languages. The final Resolution also calls on member states to adjust “national measures that affect the realization of Farmers’ Rights, in particular legislation concerning variety release and seed distribution, to protect, promote and realize Farmers’ Rights,” and “to promote sustainable biodiverse production systems and facilitate participatory approaches such as community seed banks, community biodiversity registries, participatory plant breeding and seed fairs, including considering to provide legal recognition of such approaches as tools for realizing Farmer’s Rights”.

This links directly to the message SD=HS promoted through its side events: shedding light both on the role of farmers as guardians of seeds and managers of agrobiodiversity, as well as on their capacity and aspirations to drive economic development through the institutionalization of the registration of farmer varieties and the establishment of farmer seed enterprises.

Seeing farmers as capable agents to develop their own seeds varieties, instead of as mere (seed) consumers, is a key message that the SD=HS program promotes. Showcasing to the outside world how the program has worked with governments and other stakeholders to create an enabling policy environment for farmer seed systems in the final implementation year will be key objective of our participation in the next meeting of the Treaty’s Governing Body, GB10, taking place end of 2023.