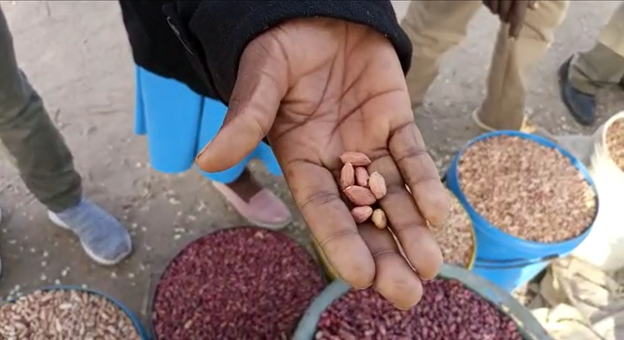 A team of Seed Production and Marketing Farmer Field School facilitators visited various potential seed buyers as part of market research survey. This took place in the frame of the Training of Trainers for Seed Production and Marketing (SPM), as it helps participants plan for a SPM Farmer Field School (FFS). They visited places where the farmers bring their produce to sell, from vegetables to grain. This was an opportunity for the trainees to get a feel of an actual local seed market and its dynamics. They were various types of grain, but the protagonists were small grains: finger millet, sorghum and pearl millet. The participants managed to find one of the long seasoned local market agents at the market.

When the facilitators asked about the source of the seed, the traders indicated they come from the local farmers but in case of shortages they would originate from elsewhere. Looking at the available seeds, the participants asked about finger mill, a crop that was selected in the diagnostic exercise as one of the potential crops. The trader confirmed she sold a lot of them, however there are no clear indications that farmers purchase them for its seeds given that the demand is constant throughout the season. The demand for Pearl millet follows the same pattern.

The discussions then shifted to Bambara nuts. The trader indicated that she would want to purchase more from the farmers, but she depends on market prices at the time The suppliers (in this case, farmers) charge very high prices, she attributes this to the scarcity of the product while demand remains high. Prices of Bambara nuts fluctuate from $20 to $45 for a 20-liter bucket. The highest price is obtained during the pre-planting season, meaning the crop is suitable for seed production in the area.

The facilitators were also interested in customers who came looking for specific varieties of different crops. One example is cow peas, at the beginning of the season around November or December many customers usually look for late maturity varieties with a large grain size, color variations, and good vegetative growth. She highlighted that on the other hand, later in the season, the customers demand the early maturing varieties because they fear that the long season varieties may not do well with the rains.

The facilitators asked whether rice was in demand, since it was on display, and if so, when is the demand it at its highest? Yes, it is in demand, but customers do not want rice for its seeds. The demand for rice slightly increases during the planting season, but not as much as other crops. The trader shared that she can sell up to 10 times 50kg bags of sugar beans in December or January and the same amount of Ground nuts in October. This is an indication of a high demand for the seeds of these crops. She then pointed out that traders usually do not display ground nuts seed during this period of the season because it there are plenty in the area.

Finally, the participants were curious about which varieties of ground nuts are most popular during the planting season. Muromo wehoto is one, and another is called Kaboko also known as KaMugabe. The trading woman added that in times of high demand the supply tends to be very low, to the extent that traders would leave Murewa and resort to Harare’s Mbare musika (the biggest farmers’ market in Zimbabwe) to close the gap. This could be an indication of high shortage of the seed.

You can reach by Dzikamai Zingwe, Field Officer Champion Seeds

SD=HS > > Snapshot: Murewa local market in Zimbabwe
Back To Top