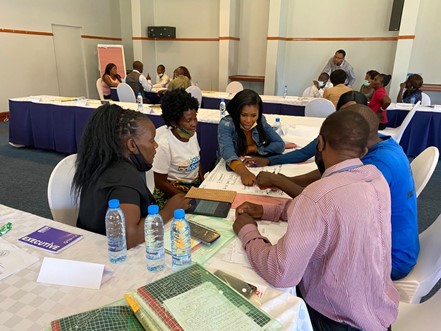 A recurrent activity under the SD=HS program is the end of season evaluation of Farmer Field Schools. In a two-day workshop, facilitators who support Farmer Field Schools from around the country join the master trainers and project staff and look at the season’s results and the challenges or difficulties they all faced.

Participants evaluate the way the different FFS groups worked, the level of participation and engagement, and at their own role as facilitators. The two-day workshop also looks at the FFS workplan, curriculum and the technical guides and materials that were used, and at the general reporting and documentation efforts. Last but not least, it evaluates collaboration among all institutions involved.

These workshops build on the evaluation that each facilitator performs with their FFS at the end of every season, thus bringing together the observations made by many FFS groups and improving their quality over time. But they also serve an additional purpose, as this is when the facilitators who followed the training-of-trainers (ToT) process complete their training and “graduate”. Some who show exception skills are invited to become master trainers. They can then support the next ToT and impart their growing experience to new facilitators. As more facilitators join every year, often from the communities where the farmer field schools are being held, the group steadily grows. After two years, our initial group of 30 facilitators grew to 70, who are able to support as many farmer field schools.

“This is not only for the elders”

In our first workshop, facilitators and master trainers working on Participatory Plant Breeding were joined by staff from the Community Technology Development Trust (CTDT), Extension Officers and a breeder. Colleagues from Oxfam Novib called in via Zoom for daily question-and-answer sessions.

One of the participants was Frank Mubuso, a young facilitator from the district of Shibuyunji, in the Central Province. He observed that after facilitating a season long FFS, he now has a clear understanding of the project’s approach and of its objectives, and he is pleased with the role he has. He feels confident and capable of facilitating FFS sessions and of guiding the participatory plant breeding process. “The knowledge we have acquired should not be kept to ourselves. We need to go and continue working on our own FFS, but at the same time we should try to facilitate others, as this will in turn increase the number of FFS in our country. This will help us improve the way we farm and helps us deal with climate change”. At the end of the workshop, he added “let’s teach a lot of people, let’s go and share the information with those that have not come here.’’

Frank also mentioned that development programs mostly invite older people to participate, making the younger members of a community feel marginalised. This feeling has grown even stronger during the last months, as the COVID-19 pandemic posed additional challenges and groups were not able to meet frequently. He believes the SD=HS program can help resolve the challenges that youths face. In the same way as other young facilitators, he feels that the program is an “avenue for exposure” and is grateful for the knowledge that he has gained, and for the skills he now has as a facilitator. He added that there is a constant need for Farmer Field School facilitators to improve themselves and, in this way, “move a step forward”. Coming together with other facilitators at the workshop gave him an opportunity to catch up and reflect on the previous Farmer Field School season. He is going to consider all the issues he discussed with his colleagues and follow the recommendations they came up with together in the new FFS he will be facilitating.

A second, similar workshop was organized for facilitators working to promote the use of local food plants to improve nutrition. Now, District Nutritionists and representatives of the National Food and Nutrition Commission of Zambia also joined the group of facilitators, staff members and extension officers.

Grace Nsemiwe, a nutritionist working in the district of Chirundu was especially happy to have worked together with CTDT and with other government extension officers. As she mentioned at the end of the workshop, she thinks that “these are very nice and helpful activities. Our involvement in this program as extension staff has helped us work together with farmers.” Grace further stated that her colleagues all wish that these programs continue: “To the funders and Oxfam, let them continue maybe for the next ten or twelve years so that we can really feel the impact of these programs in our communities.”

She hopes that in the future the work broadens to include representatives of the Ministry of Education, not just those working in agriculture and health: “Everybody in Chirundu thinks that these programs need to be implemented, but that schools should also be considered, especially if we think of the need for school gardens. I say so because it is said that what is put in a child cannot be forgotten. What is given to a child whilst still young will remain in them even as they grow up.”

SD=HS > > Stories: End of Season Evaluation Workshops
Back To Top