Skip to: Meeting of spokeswomen and unions culminates in national forum on native seeds 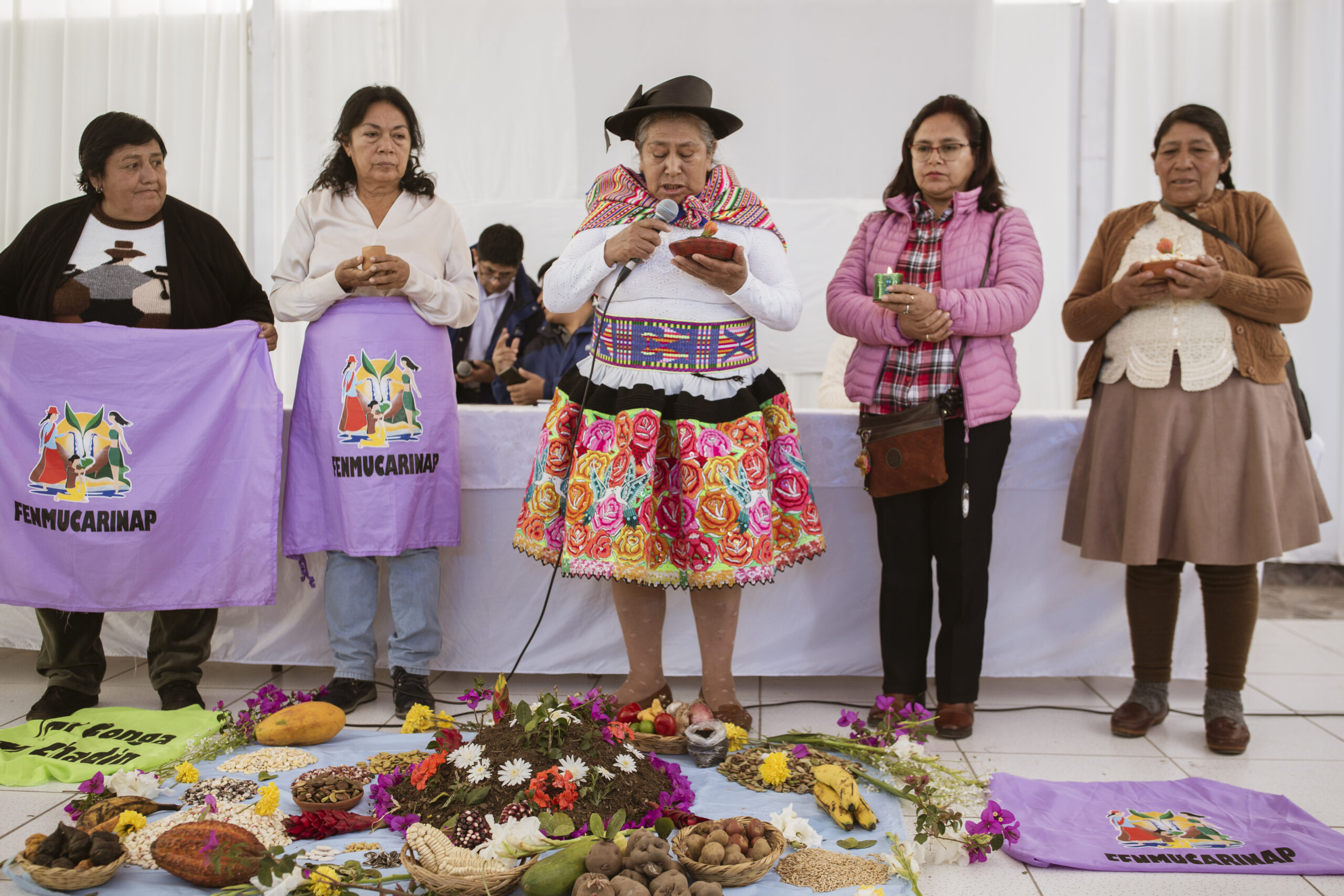 As part of the Sowing Diversity=Harvesting Security project, Oxfam in Peru, with the support of Fomento de la Vida – FOVIDA, organized the First Meeting of Andean and Amazonian Climate Spokeswomen in Huancayo, Junín. It brought together 50 rural, peasant and indigenous women leaders and representatives of organizations and agricultural associations from 14 regions of the country to make public statements and propose proposals on climate change with an intercultural and gender approach.

The purpose of this meeting was to identify the differentiated impacts of climate change in their territories, as Andean and Amazonian women. To exchange their knowledge and experiences on adaptation and resilience strategies and articulate a common agenda as women. Meanwhile, strengthening their capacities and voices, reaffirming their multiple roles in the face of the climate crisis.

This initiative is based on the need to demonstrate differentiated impacts of climate change on the wellbeing, ways of life and territories of women, who are responsible for the sustainability of life, care and nature. They are the ones who must propose measures to adapt to climate change from their ancestral knowledge and practices, as guardians of native seeds and guarantors of food and nutritional security in the country.

These proposals will be presented mainly to the Ministry of the Environment (MINAM) and the Ministry of Development and Irrigation (MIDAGRI). These fit within the framework of the so-called Second Agrarian Reform promoted by the government and launched as having “a woman’s face”. The full statement will be available on Oxfam’s web pages in Peru and Fovida in the coming days.

NATIONAL MEETING OF UNIONS FOR FAIR FOOD SYTEMS AND RIGHTS

Faced with the agri-food crisis, climate change and the draft “Second Agrarian Reform Law”, rural, indigenous and peasant men and women gathered in the city of Huancayo, Junín, as part of the National Meeting of Trade Unions for Fair Food Systems and Rights, representing 18 trade unions, peasant and native communities from different regions of the country; with the aim of articulating demands and proposals for an effective implementation of our rights and fair food systems.

The agrifood crisis Peru is worsening and becomes more evident in the face of the pandemic, the external war conflict and the current political crisis. These factors have generated a rise in the price of oil, but also in the costs of inputs, transportation and production. In addition, the country is exposed to increased prices of food commodities, including fertilizers, on which medium and large Peruvian agricultural producers depend on. And of course, the irreversible effects of climate change as a structural factor that affects small producers, more than other groups.

This scenario makes it necessary to create opportunities for exchange and reflection such as this space, to articulate a common agenda in favor of family farming in a context of multiple crises and where the agriculture sector is forgotten as whose longstanding demands are not being met is agriculture.

The meeting was attended by specialists from civil society, such as the Center for Peruvian and Social Studies (CEPES), a specialist in indigenous peoples’ rights and officials from the Ministry of Agrarian Development and Irrigation (MIDAGRI), who shared their thoughts on the global food crisis, the Second Agrarian Reform process and policies for the transition to agroecology.

At the end of the event, representatives and agrarian leaders tabled a request to the state through a statement:
The effective implementation of the “Second Agrarian Reform Law”, the effective implementation of the National Agroecology Plan, and the modification of the Native Seeds Law that does not contemplate the incorporation of small producers and the conservation of agrobiodiversity, agroecological policies that promote the conservation and recovery of native crops and are implemented from a reciprocity and cultural relevance approach, the protection of native seeds in the face of the food and climate crisis, that regional governments promote and ensure the effective participation of indigenous and peasant rural women, among others.
This statement will be submitted, signed by the agrarian organizations and unions, to the Ministry of Agrarian Development and Irrigation (MIDAGRI) in the coming days.

The event, held on October 25, 2022, was organized by Oxfam in Peru and Fomento de la Vida – FOVIDA, within the framework of the Sowing Diversity Harvesting Security Project in its second phase.

This is the second year that this meeting has been held to demand that native and local seeds, the basis of agroecological production, be incorporated into the existing regulatory framework, which excludes them from important markets, considers them “informal” and labels them poor quality. This can end up pressuring small producers to abandon their native seed system and adopt others.

The demands of the representatives of the agrarian unions revolved, above all, around the modification of the General Seed Law No. 27262. Demanding to include traditional and native seed systems, and recognizing their operation based on agrobiodiversity zones. The group insisted that this law should promote agroecological and organic production as an alternative for adaptation and mitigation of the effects of climate change, but also revalue and recognize the role of women as guardians of seeds and agrobiodiversity through a special fund.  In addition, unions demand to reactivate and strengthen the National Seed Commission and the Regional Seed Committees, involving the participation of peasant, indigenous and native communities, as well as representatives of agrarian organizations, to generate spaces for multisectoral coordination, where public policies are defined to strengthen traditional seed systems; among others.

The statement will be submitted (signed by the agrarian organizations and unions) to the Ministry of Agrarian Development and Irrigation (MIDAGRI) in the coming days and will be available on the institutional pages of Oxfam in Peru and Fovida.