Skip to: Oxfam and No Patents on Seeds! demand a stop to the patenting of plants: 180.000 signatures handed over to the European Patent Office 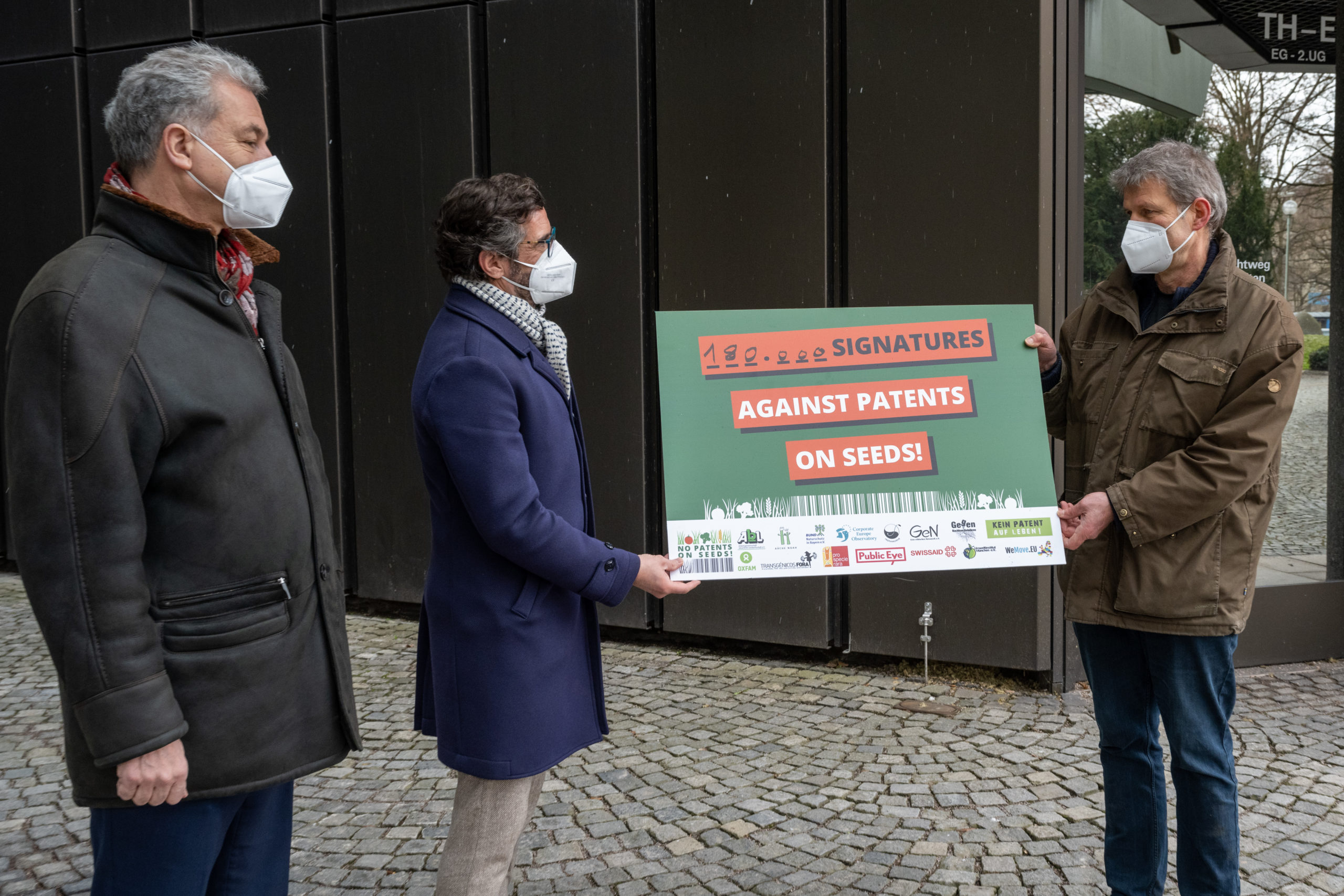 Photo; No Patents on Seeds

Plants and animals derived from conventional breeding are no longer patentable. This was the verdict published by the Enlarged Board of Appeal of the European Patent Office (EPO) in May 2020. A new report of Oxfam’s partner No Patents on Seeds! shows, however, that such patents are still being applied for due to the legal loopholes that continue to exist. The report, together with more than 180.000 signatures, have been handed over to the EPO.

The report gives an overview of patent applications filed on conventionally bred plants (and animals) in 2020, and shows how multinational seed corporations are trying to circumvent the new patent rules by exploiting a number of loopholes.

Oxfam is concerned about the growing number of patents on plants and its effects on food security: patented plants cannot be used for further breeding without the patent holder’s permission. This is a big problem, because farmers and breeders need access to all existing varieties to be able to create new crops that are resistant to new diseases or weather conditions as a result of climate change.

The biggest multinationals, in particular, can afford the high costs of patents and necessary legal advice, thereby strengthening their market position. The 4 largest seed companies, Bayer (Monsanto), Corteva (DowDupont), BASF and Chemchina (Syngenta), already own more than half of the global seed market. This also has direct consequences for farmers. The smaller the market, the less freedom of choice, and the prices of seeds have skyrocketed in recent decades. In addition, farmers in many countries are not allowed to reuse the seeds of patented varieties. This is especially problematic for small farmers in developing countries who do not have the money to buy new seeds for every growing season. Oxfam believes that our food production should not depend on a handful of companies. Seeds are the beginning of every food chain, they should not be monopolized.

For years, there has been debate in Europe whether patents on plants and animals created through crossing and selection can be patented. The 1973 European Patent Convention states that “essential biological processes” such as crossbreeding may not be patented, but in 2015 the European Patent Office decided to grant patents on the plants and animals derived from such processes. After strong political and social pressure, the EPO amended its policy last year, but did not do enough: The EPO did not clarify what exactly is meant by “essential biological processes”, and that is now causing problems.

The new report shows how companies are systematically blurring the boundaries between ‘conventional’ and ‘technical’ breeding methods: the companies use specific wording in their patent applications to mix technical elements (genetic engineering; gene editing) with standard methods of conventional breeding to give the impression of a technical invention. Oxfam, together with the NGO coalition No Patents on Seeds!, is therefore calling for a moratorium on the patenting of plants and animals until the existing loopholes have been closed. You can join and sign the petition till June 15 on the website of WeMoveEurope.

SD=HS > Uncategorized > Oxfam and No Patents on Seeds! demand a stop to the patenting of plants: 180.000 signatures handed over to the European Patent Office
Back To Top