Skip to: ‘Seed: The untold story’, featured at IDFA 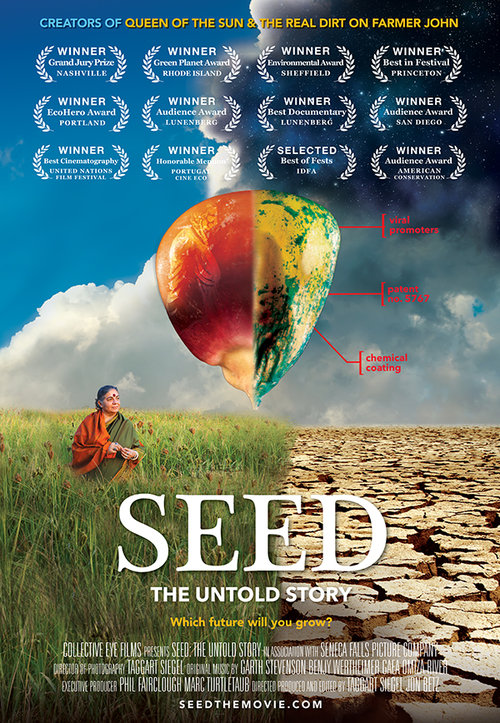 “Seed: The untold story” was broadcasted during the International Documentary Festival in Amsterdam. The festival is widely known for its cutting-edge and socially and culturally engaged program. The movie, directed by Jon Betz and Taggart Siegel, was selected for the Oxfam Novib subprogram in which documentaries are shown that are thematically related to fields in which the organization is active. This year the themes were Migration, Inequality and Seeds and Biodiversity.

The movies, which do not necessarily represent the vision of Oxfam Novib, are chosen because they raise debate and create awareness. “Seed: The untold story” celebrates biodiversity and was much appreciated for its beautiful cinematography. After the movie there was a lively discussion with Dutch photographer Sacha de Boer, who made a series of women farmers in Zimbabwe and Gigi Manicad,  senior program officer SD=HS for Oxfam Novib.

On behalf of Oxfam Novib, the SD=HS team likes to thank all guests that attended the movie and joined in the discussions afterwards.

“Few things on Earth are as miraculous and vital as seeds. Worshipped and treasured since the dawn of humankind. In the last century, 94% of our seed varieties have disappeared. SEED: The Untold Story follows passionate seed keepers protecting our 12,000 year-old food legacy. As biotech chemical companies control the majority of our seeds, farmers, scientists, lawyers, and indigenous seed keepers fight a David and Goliath battle to defend the future of our food. In a harrowing and heartening story, these heroes rekindle a lost connection to our most treasured resource and revive a culture connected to seeds. SEED features Vandana Shiva, Dr. Jane Goodall, Andrew Kimbrell, Winona Laduke and Raj Patel.”

Read more about the IFAD-Oxfam Novib selection (in Dutch)

SD=HS > Uncategorized > ‘Seed: The untold story’, featured at IDFA
Back To Top