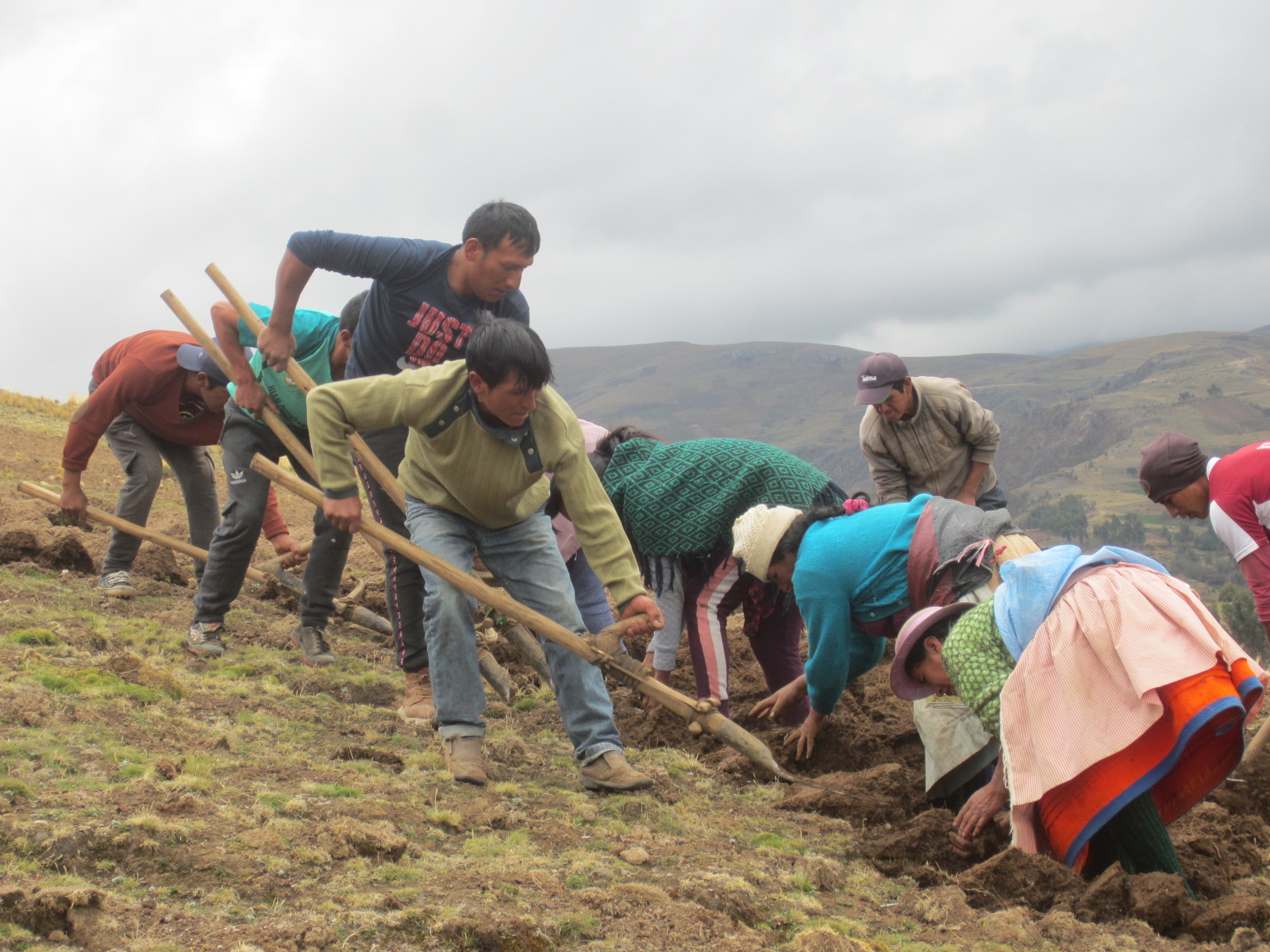 The lands and production areas of the communities we are working with in Central Andes, are mostly located in the tropical subalpine moist tundra and tropical montane moist forest life zones, with altitudes ranging from 2000 to 4000 meters (over 13,000 feet) above sea level, an average annual rainfall of 800-1200 mm and an average annual temperature of 6-11 °C

The production systems are based on dryland farming, making limited use of irrigation systems and certified seeds. Communities diversify production as a strategy to reduce risks to extreme climate conditions, and their yields are below the national average.

Even though, Peru is one of the richest centers of crop diversity and domestication in the world, high Andean small producers live in poverty and vulnerable conditions, and are affected by erosion and loss of plant genetic resources as a result of the displacement of native varieties to foreign varieties and deteriorated seed systems due to the loss of ancient practices for management and scaling up.

During the last decades, the Peruvian state has focused on promoting export agriculture (large properties and monoculture), allocating resources to the construction of large irrigation systems, mainly on the north coast of the country. However, after many decades of neglect, attention has been turned to small farming, which represents 97% of production units nationwide. It should be noted that, during the health crisis, small farming has contributed to food supply of large markets and food security of the population.

The program is directly supporting almost a thousand poor, climate-vulnerable, indigenous, and non-indigenous farmers, organized in Campesino Communities, ancient organizations that manage lands formally granted in the Peruvian Agrarian Reform Act of 1969. Campesino communities have an ancestral relationship with their land and have contributed to the conservation of local culture, ecosystems, and agrobiodiversity. One of their main activities is family-based agriculture whose main aim is self-consumption, although any surplus can be sold.

There is still a predominant patriarchal structure and gender differentiation among communities. Men have adopted productive roles, while women have taken on reproductive roles while they “assist” in productive activities. The migration of men to cities in search of better job opportunities is forcing women to take control of farms, which is why they have a greater interest in improving their technical-productive skills, leadership and food security capacities, and participate more actively in decision-making processes within the family and community. Furthermore, young people demand better job opportunities in their homelands and the revaluation of family farming.

We are creating a FFS network in Junin and Huancavelica regions to introduce and recover varieties of potatoes, fava beans, quinoa, and barley that are resistant to extreme weather events through an adaptive research. FFS are functioning through traditional organizations and plant genetic resources access is being facilitated by national research institutes.

We are implementing six community seed banks to spread and protect genetic material of native varieties. Seeds will be distributed among farmers to renew and diversify their seed systems. This biodiversity will be shared and exchanged in fairs and events promoted by the Project, which will be later institutionalized by provincial municipalities.

We are promoting the use NUS in a sustainable way, by participating in demonstrative sessions, fairs and contests on diverse, nourishing and balanced recipes using NUS and local biodiversity products and adapted communities’ socio-economic conditions, in coordination with health centers, culinary schools. Masculinity workshops will be conducted to encourage men to perform tasks like cooking, which is generally done by women.

We are promoting the formulation of a National Plan for the Promotion of High Quality Local Seeds by Small Farmers to support the traditional seed system and the enforcement of Farmers’ Rights since no legal framework acknowledges traditional seed systems that use ancient practices as a strategy for rural development. To promote this plan, we are creating alliances with several indigenous and small-scale farming organizations and we are organizing a capacity building process of political advocacy for community members and small-scale farming organizations’ leaders to conduct the political process.

Fomento de la Vida – FOVIDA – is a Peruvian organization founded in 1984 with the aim of developing activities to improve the living conditions of low-income population to create a more just and equitable society. Their task is oriented to local sustainable development, taking into account political and social interactions, environmental systems, use of productive resources and economic integration as means to enable cooperation and human welfare. FOVIDA’s mission is to improve the technical and political performance of society stakeholder for the sustainable, local, regional and national territorial development.